Born in Pennsylvania, on May 4, 1958, and was brought up in nearby Kutztown, Pennsylvania. At a very early age, he developed a passion for drawing, learning basic skills in cartooning from his father and from the popular culture around him, such as Dr. Seuss and Walt Disney. Upon graduation from high school in 1976, Haring enrolled in a commercial arts school, the Ivy School of Professional Art in Pittsburgh. He soon discovered he had no interest in becoming a commercial graphic artist and dropped out after two semesters. Haring continued to research and practice on his own while in Pittsburgh, and in 1978 he had a solo exhibition of his work at the Pittsburgh Arts and Crafts Ce.

Haring moved to New York City later the same year and enrolled in the School of Visual Arts (SVA). Haring found a vibrant alternative art culture in New York that formed in the downtown streets, the subways and spaces in clubs and former dance halls outside of the gallery and museum system. He became acquainted with fellow artists Kenny Scharfand,JeanMichel Basquiat here, as well as with the musicians, performance artists and graffiti writers that made up the burgeoning art  scene. In the energy and spirit of this scene, Haringwas swept up and started organizing and engaging in exhibits and performances at Club 57 and other alternate venues

Haring was also influenced by the work of Jean Dubuffet, Pierre Alechinsky, William Burroughs, Brion Gysin and Robert Henri’s The Art Spirit manifesto, which proclaimed the artist’s fundamental freedom, in addition to being fascinated by the creativity and energy of his contemporaries. Haring was able to drive his own youthful instincts with these influences into a singular kind of graphic language focused on the line’s primacy. Haring was also drawn to the public and participatory nature of the work of Christo, especially Running Fence, and to the unusual fusion of art and life by Andy Warhol, and was determined to devote his career to the development of a genuinely public art 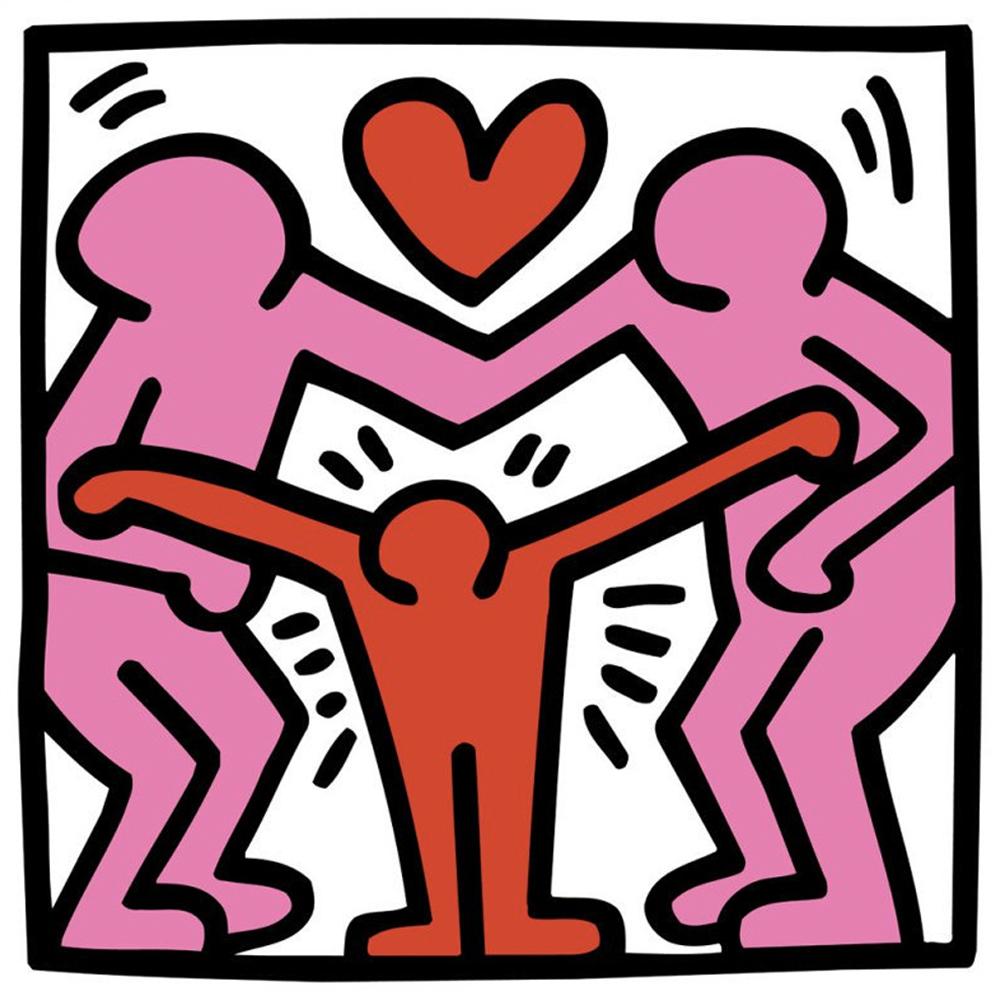 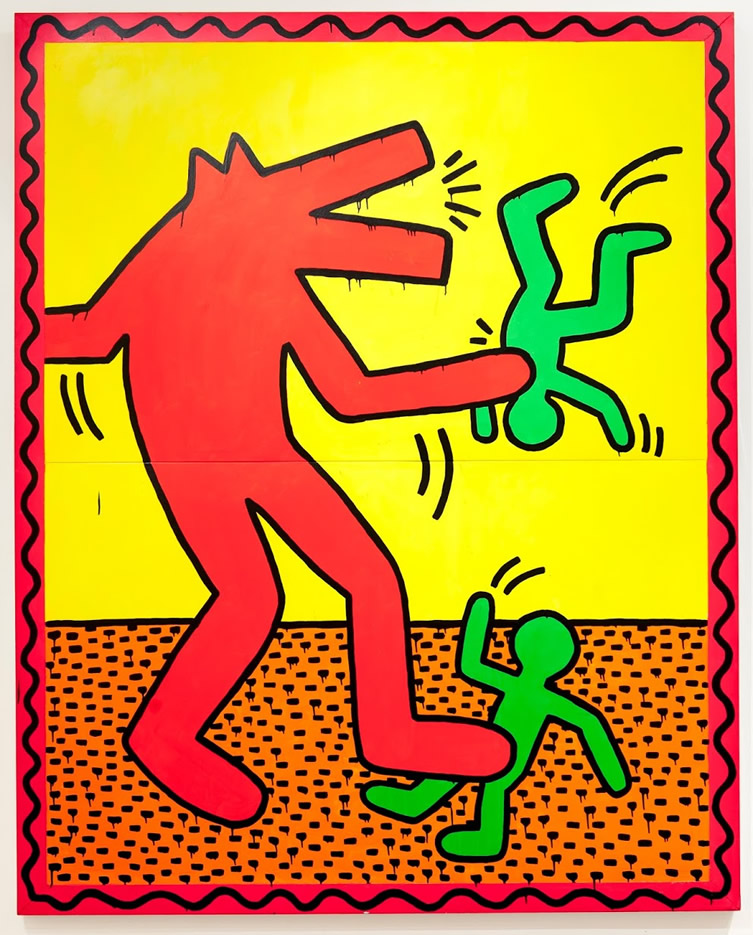 Haring experimented with performance, video, installation and collage as a student at SVA, while still maintaining a strong dedication to drawing. In 1980, when he found the unused advertisement panels covered in matte black paper in a metro station, Haring discovered a highly efficient medium that enabled him to connect with the wider audience he wanted. On these blank paper panels in the subway system, he started making sketches in white chalk. Between 1980 and 1985, in swift rhythmic lines, Haring created hundreds of these public drawings,

Often making as many as forty “subway drawings” in one day. New York commuters became acquainted with this smooth flow of images, which often stopped engaging the artist when they met him at work. As Haring said, the subway became a “laboratory” to try out his ideas and to play with his simple lines. 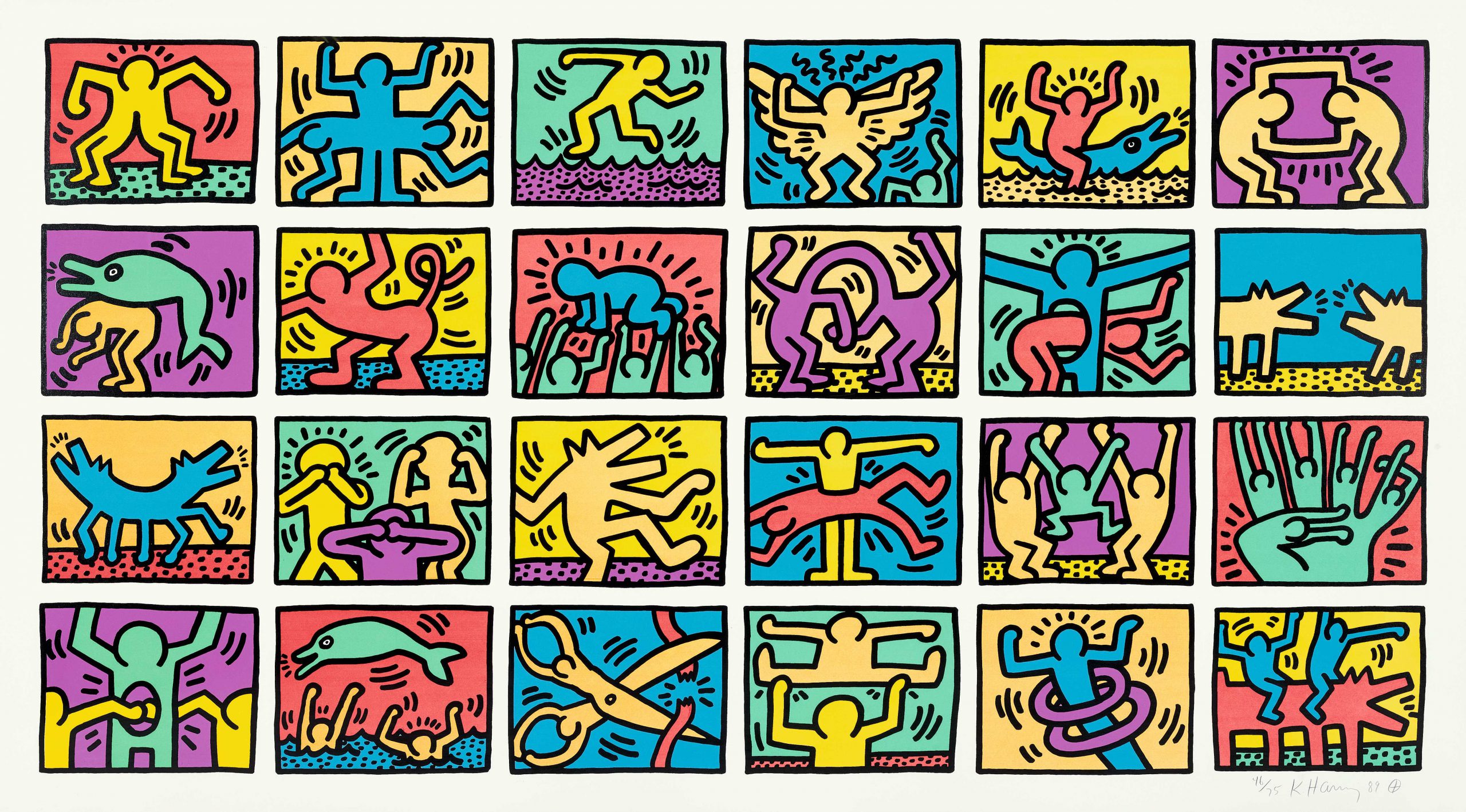 Haring gained international recognition between 1980 and 1989 and took part in several group and solo exhibitions. His first solo show in New York was held in 1981 at Westbeth Painters Space. With an enormously successful and critically acclaimed one-man show at the Tony Shafrazi Gallery, he made his SoHo gallery debut in 1982. He also took part in renowned international survey exhibitions during this time, such as Documenta 7 in Kassel; the São Paulo Biennial; and the Whitney Biennial. In the first half of the 80’s, Haring also completed various public ventures, ranging from an animation for the Spectacular billboard in Times Square, designing sets and backdrops for theaters and clubs, producing Swatch watch designs and an Absolut vodka advertisement campaign, and creating murals worldwide. 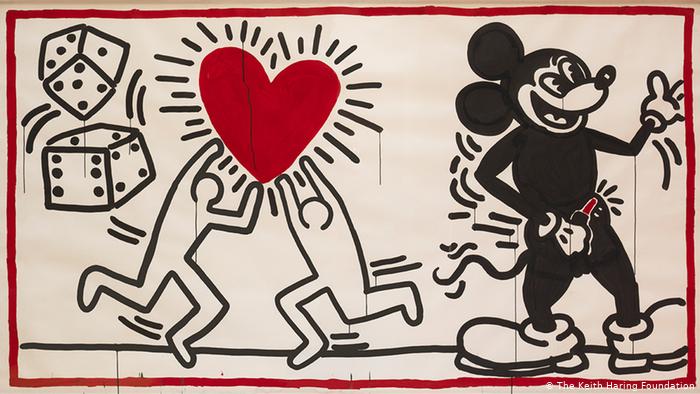 Haring opened the Pop Shop in April 1986, a Soho retail store selling T-shirts, toys, posters, buttons and magnets bearing his pictures. In an abstract black on white mural, Haring found the shop to be an extension of his work and painted the whole interior of the building, creating a striking and special retail atmosphere. The aim of the store was to give customers greater access to his work, which was now readily accessible for low-cost items. The shop faced criticism from many in the art community, but Haring remained committed to his desire to make his artwork accessible to as large an audience as possible and received strong encouragement from colleagues, fans and mentors, including Andy Warhol, for his project.

I don’t think art is propaganda; it should be something that liberates the soul, provokes the imagination and encourages people to go further. It celebrates humanity instead of manipulating it.

In 1988, Haring was diagnosed with AIDS. In 1989, he founded the Keith Haring Foundation, whose mandate is to provide AIDS organizations and children’s services with funding and imagery and to extend the audience through exhibits, publications and the licensing of his photographs for Haring’s work. During the last years of his life, Haring enlisted his imagery to talk about his own disease and create AIDS advocacy and awareness.

The work of Haring was featured in over 100 solo and group exhibitions during a brief yet intense career that spanned the 1980s. He was the subject of over 40 newspaper and magazine publications in 1986 alone. He was widely sought after, collaborating with artists and performers as diverse as Madonna, Grace Jones, Bill T. Jones, William Burroughs, Timothy Leary, Jenny Holzer, Yoko Ono and Andy Warhol, to engage in collaborative ventures. Haring was able to draw a large audience and ensure the accessibility and lasting power of his imagery, which has become a widely accepted visual language of the 20th century, by communicating universal concepts of life, death, love, sex and war, using the primacy of line and directness of message. 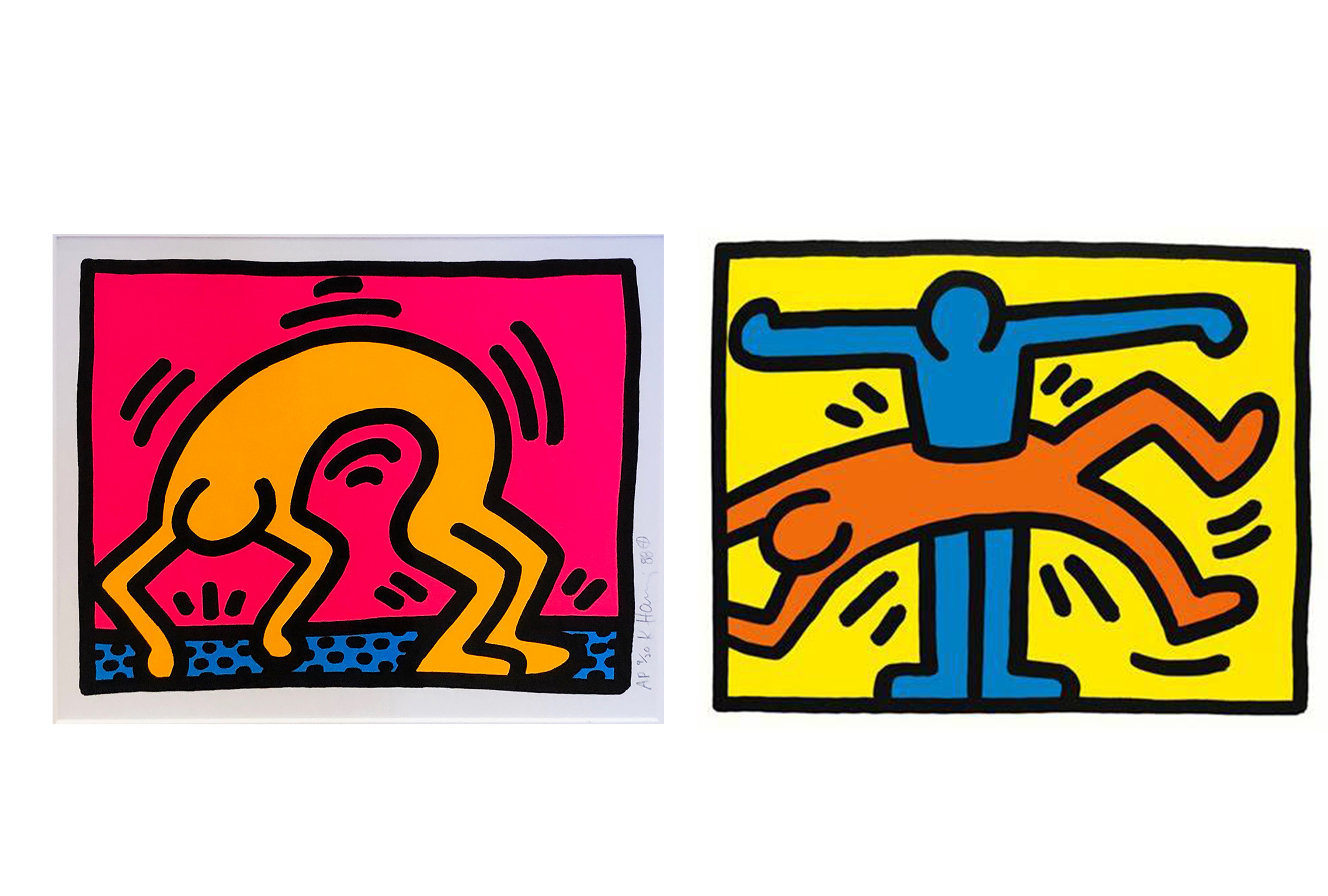 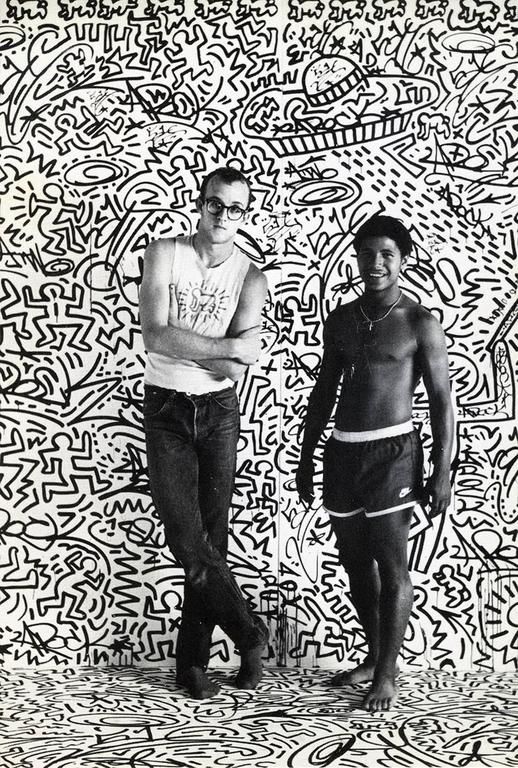 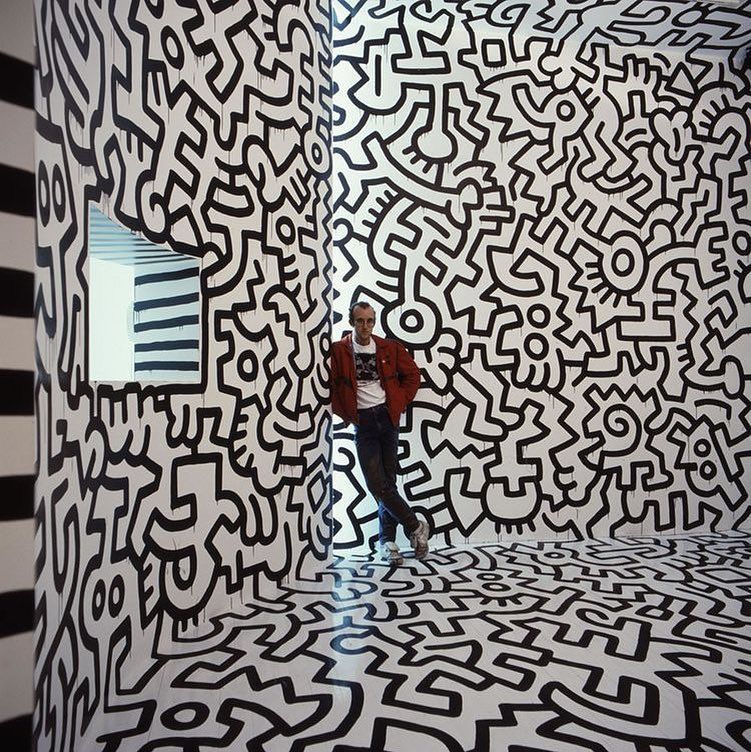 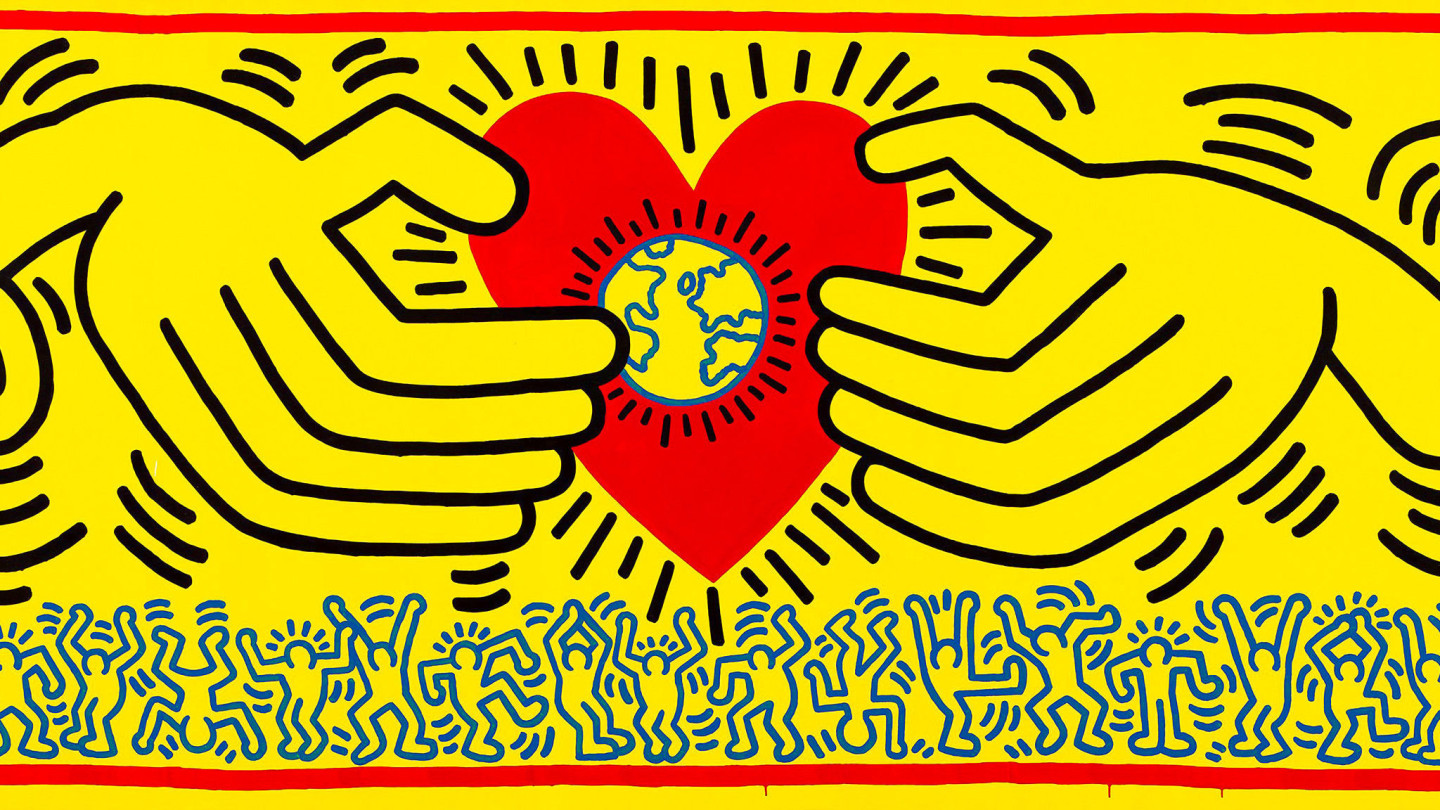 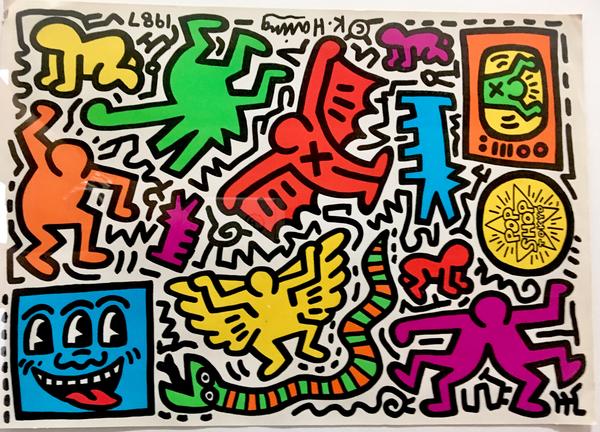 Haring has been the subject of many international retrospectives since his death. Keith Haring’s work can be seen in the galleries and collections of major museums across the globe today.